Alex and I are sitting in Seoul airport waiting for our connecting flight home, tired after getting less than five hours sleep last night thanks to a night out in Tokyo’s entertainment district, Shinjuku, and a 5am start this morning to catch our first flight. For the sake of completeness, I’m going to squeeze Kyoto, Tokyo and Kawaguchiko (one of the Five Lakes with views of Mount Fuji) into a single post.

We took the train from Osaka to Kyoto on Monday, and took a bus from the train station to our small hostel run out of an old traditional Japanese house somewhere in the northern parts of the urban sprawl that is Greater Kyoto. Kyoto is a city spoiled by heritage, but to me it felt less a city (at least in the old European sense) than a region which would once have been large tracts of farmland, encircled by temples and shrines dotting the surrounding hills, centres of religious, administrative and, later, imperial power. Old-style houses and streets are confined to only a few disconnected neighbourhoods. Between all of these is an ugly urban sprawl, intersected by elevated highways and train tracks. This makes Kyoto an exhausting place to visit, particularly if you want to see as many sights from The Guidebook as possible (cough Alex). As a consequence, it’s unavoidable that you’ll spend a lot of time on busses and trains, passing through a very uninteresting cityscape, or walking along roads which at times can feel like the North Circular. 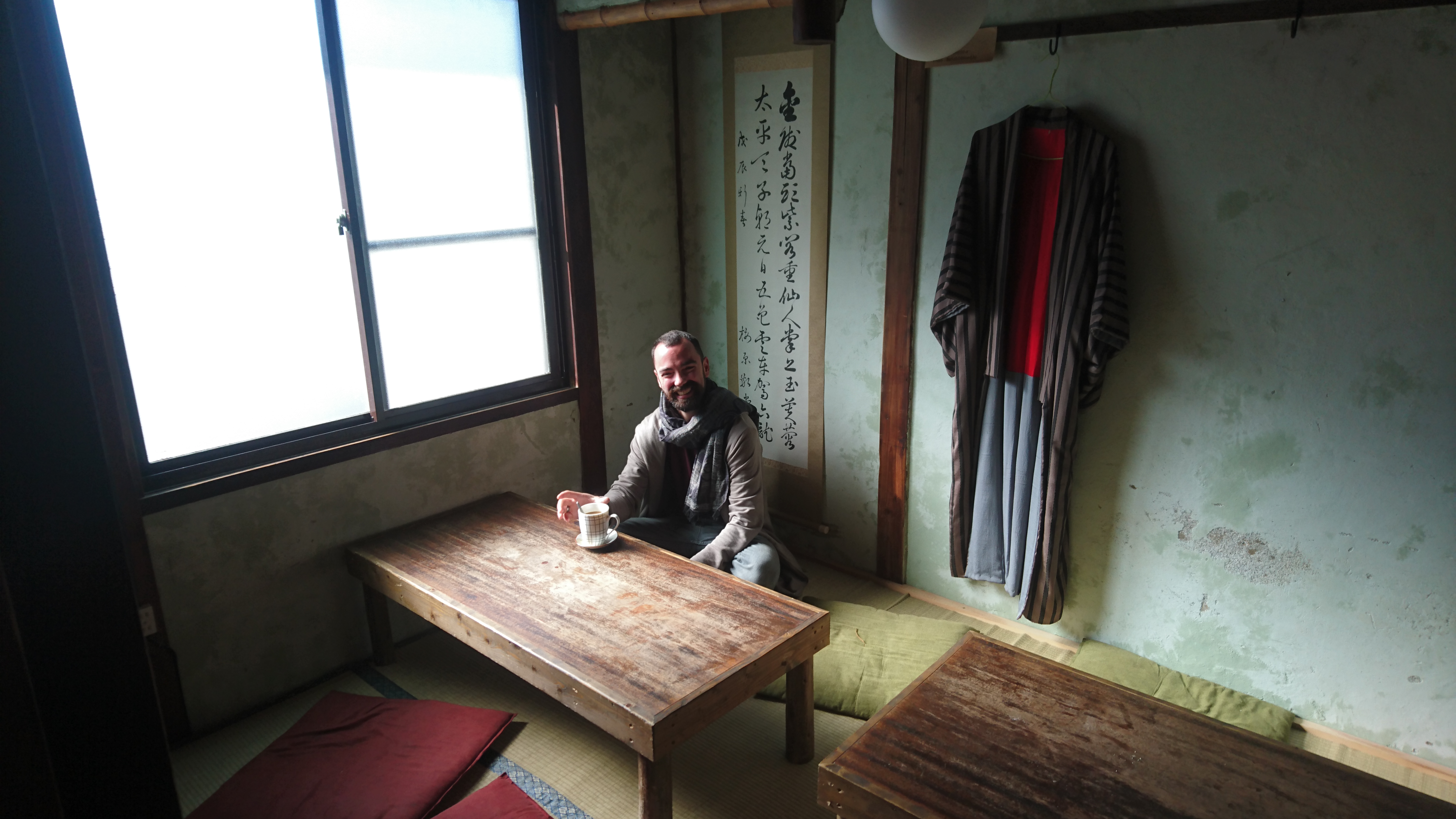 The Japanese-style tearoom in our hostel where everyone, from the other guests to the owners, was French

The trouble with Kyoto, though, is that you forgive it. Over and over again. And that’s what makes it so maddening. Take, for instance, our first view of this beautiful pagoda - and UNESCO World Heritage site - lit up at night. 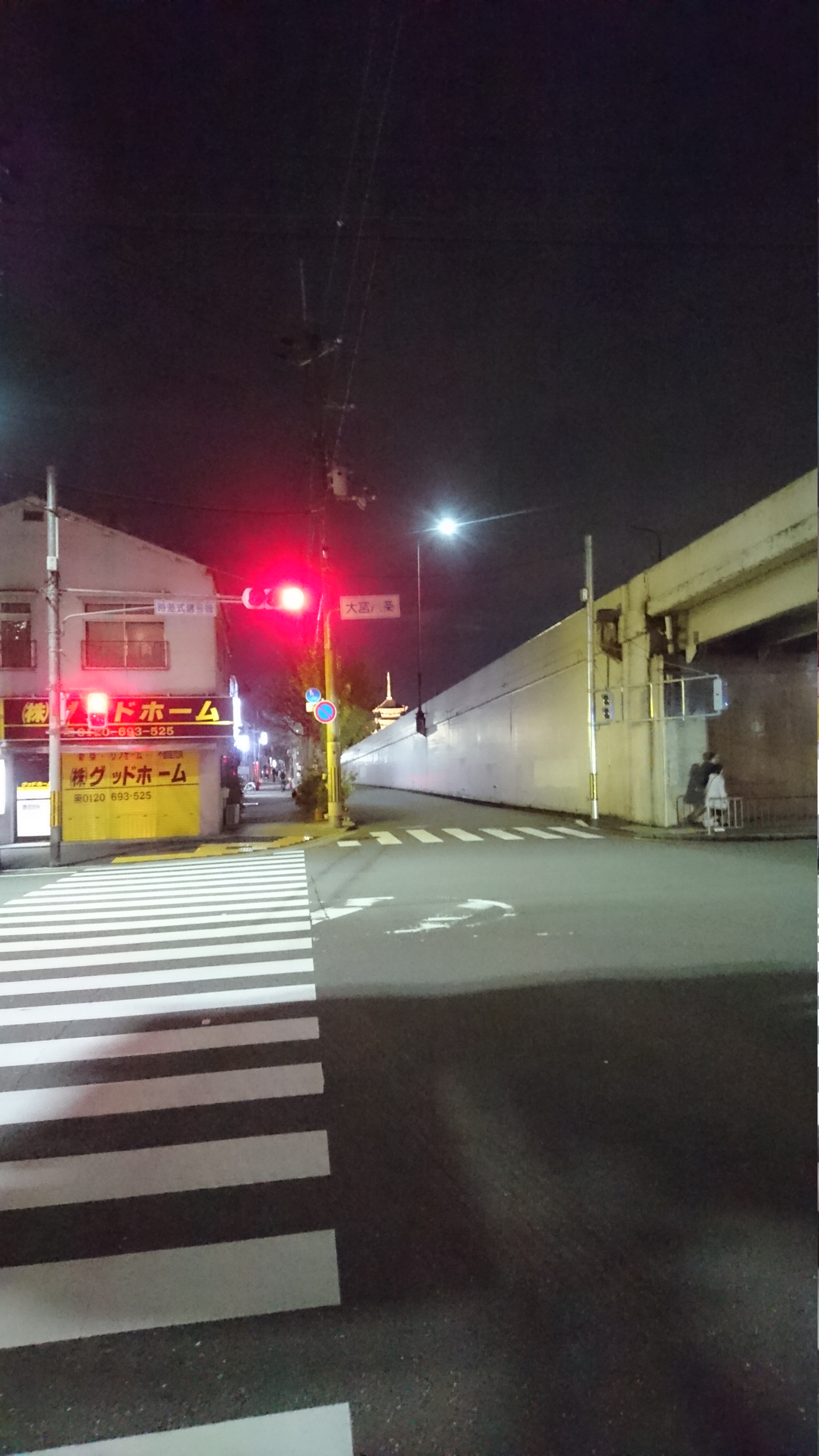 The incongrous settings of these beautiful historic buildings jarred our Western sensibilities. But, it has to be said, once within the temple grounds (and having paid your entrance fee, typically ¥500, or about £4), you feel a world apart from Kyoto’s charmless avenues. Many of the sights were instantly recognisable, but a particular highlight was the Path of Philosophy, an unbroken walking trail along a koi-filled stream lined with trees which, at this time of year, were just starting to turn a brilliant orange-red colour. But then, lunch beckons, and to avoid the touristy gift shops and overpriced street food vendors you try heading back into Kyoto city, only to find yourself, once again, in a bland Asian urbanity which stretches out monotonously in all directions. 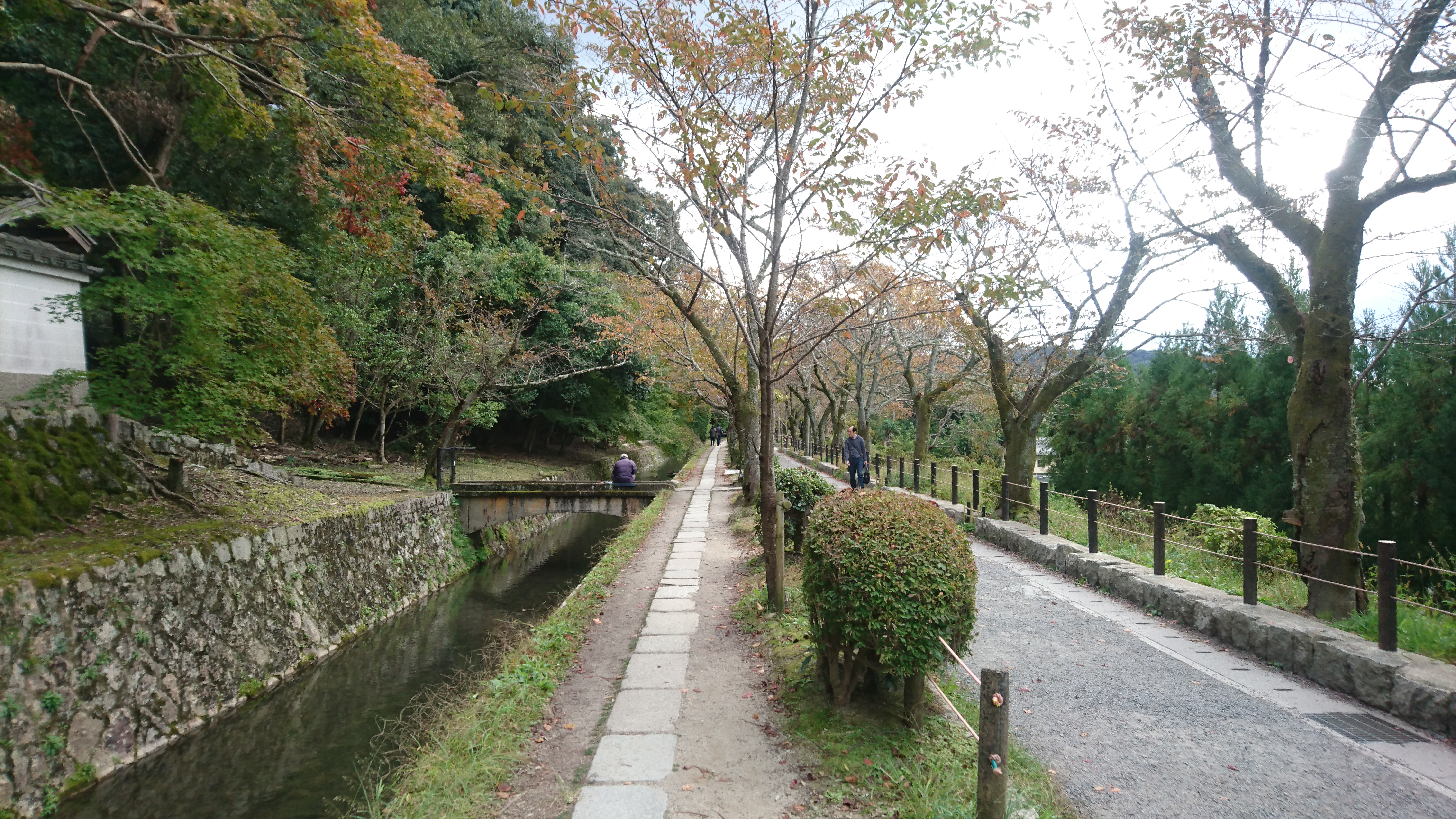 The Path of Philisophy 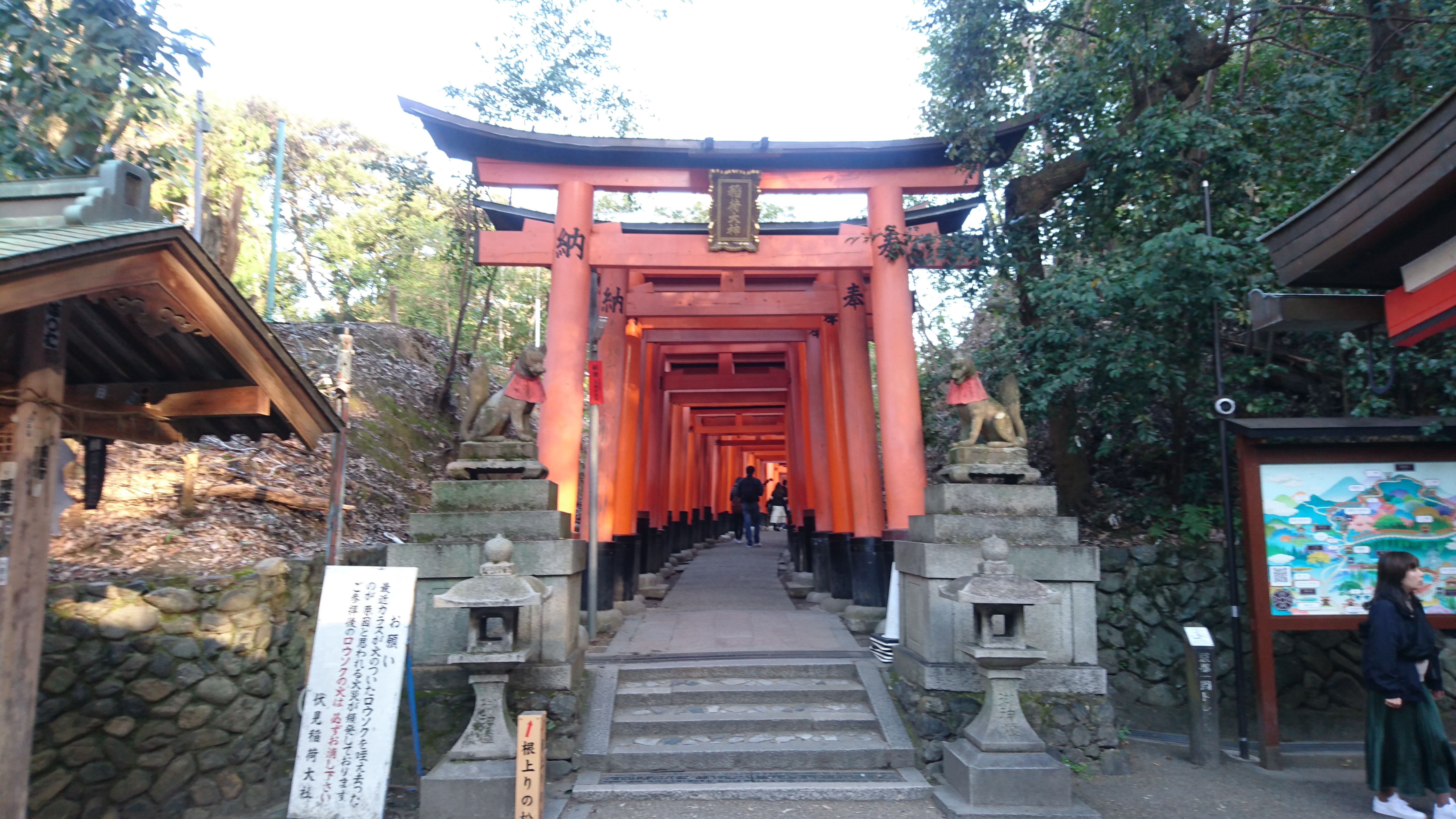 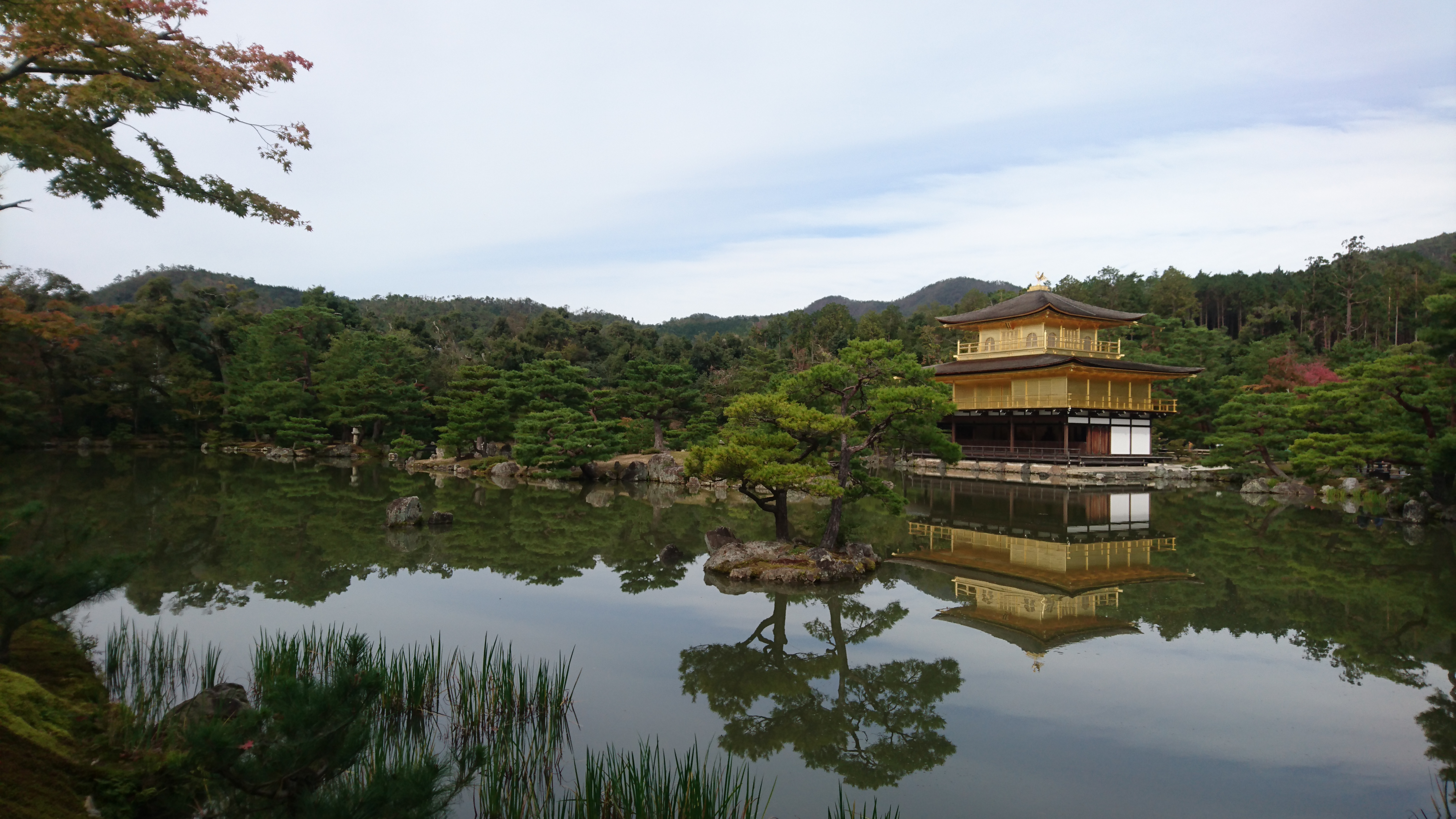 A well-framed photo of the world-famous Golden Pavillion 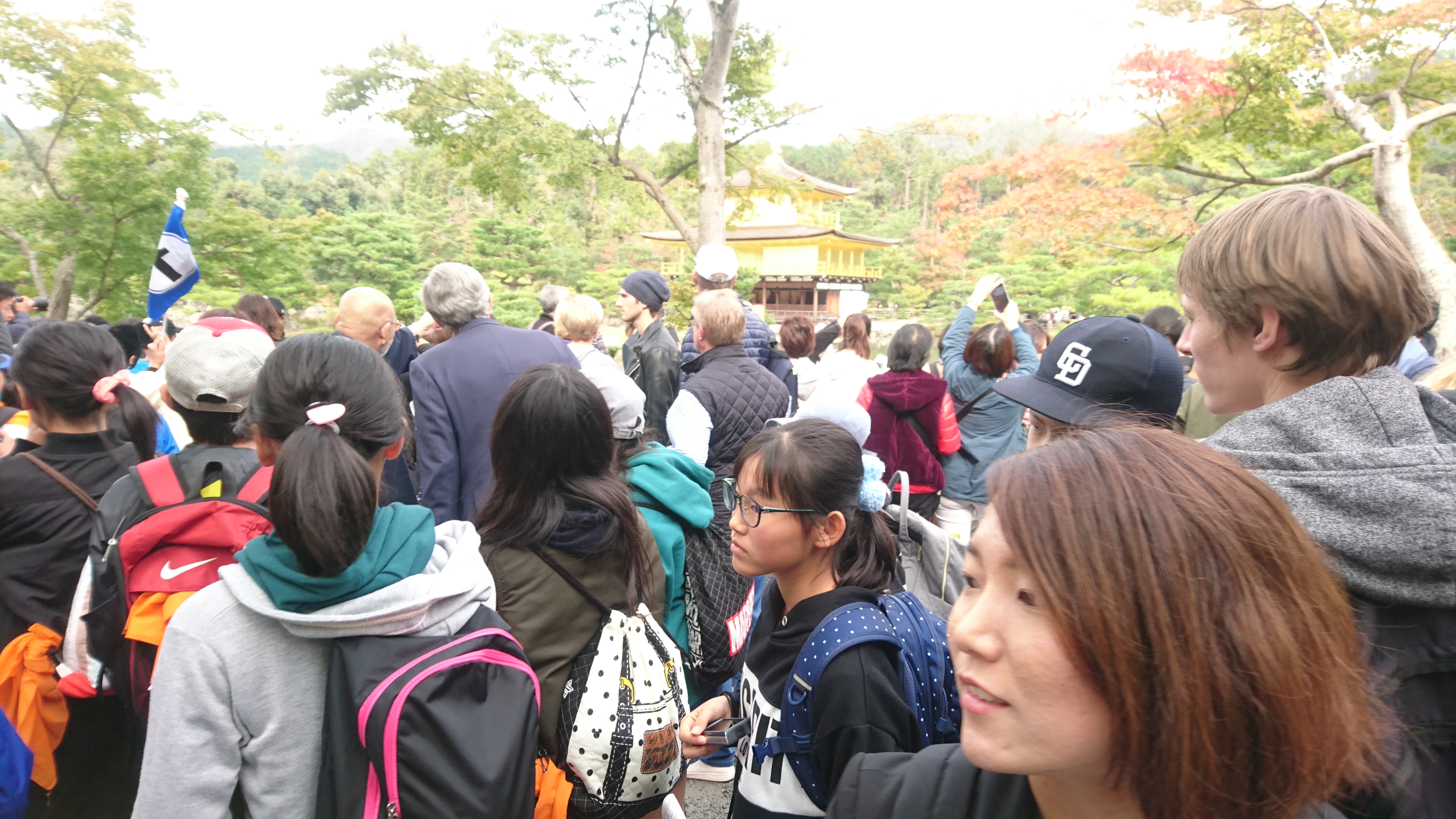 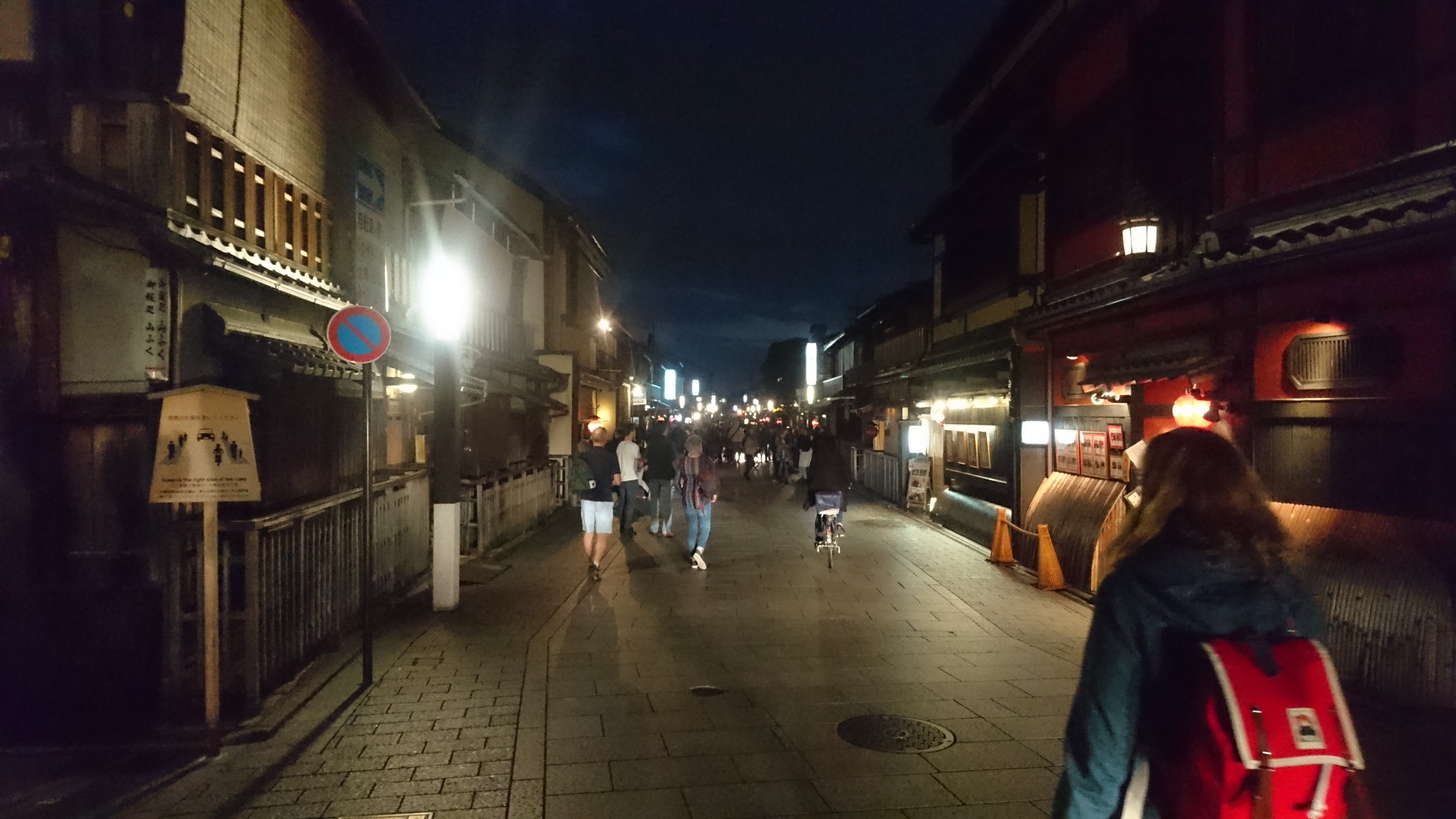 The streets of Old Kyoto by night

Certain sights, such as Mount Inari and the Bamboo Grove, are best viewed early in the morning before the crowds arrive. But being in Kyoto for only three nights, we had a limited number of mornings available to us. It was under these circumstances that Alex inflicted upon me her Bamboo Torture: an attempt at seeing the Bamboo Grove early on Thursday morning before we caught our shirkansen train to Tokyo. This entailed waking up at 6 am, catching a 30 minute bus to the bamboo grove, finding it, taking some pictures, having a quick breakfast from a street vendor, taking the bus back to the hostel, packing up our things and checking out, taking another bus to the station, before catching the train at around 11:30. Gruelling, and, despite the effort, we were not the only strained couple there even at such an early hour. The bamboo was very nice though (Alex took some better ones with her camera): 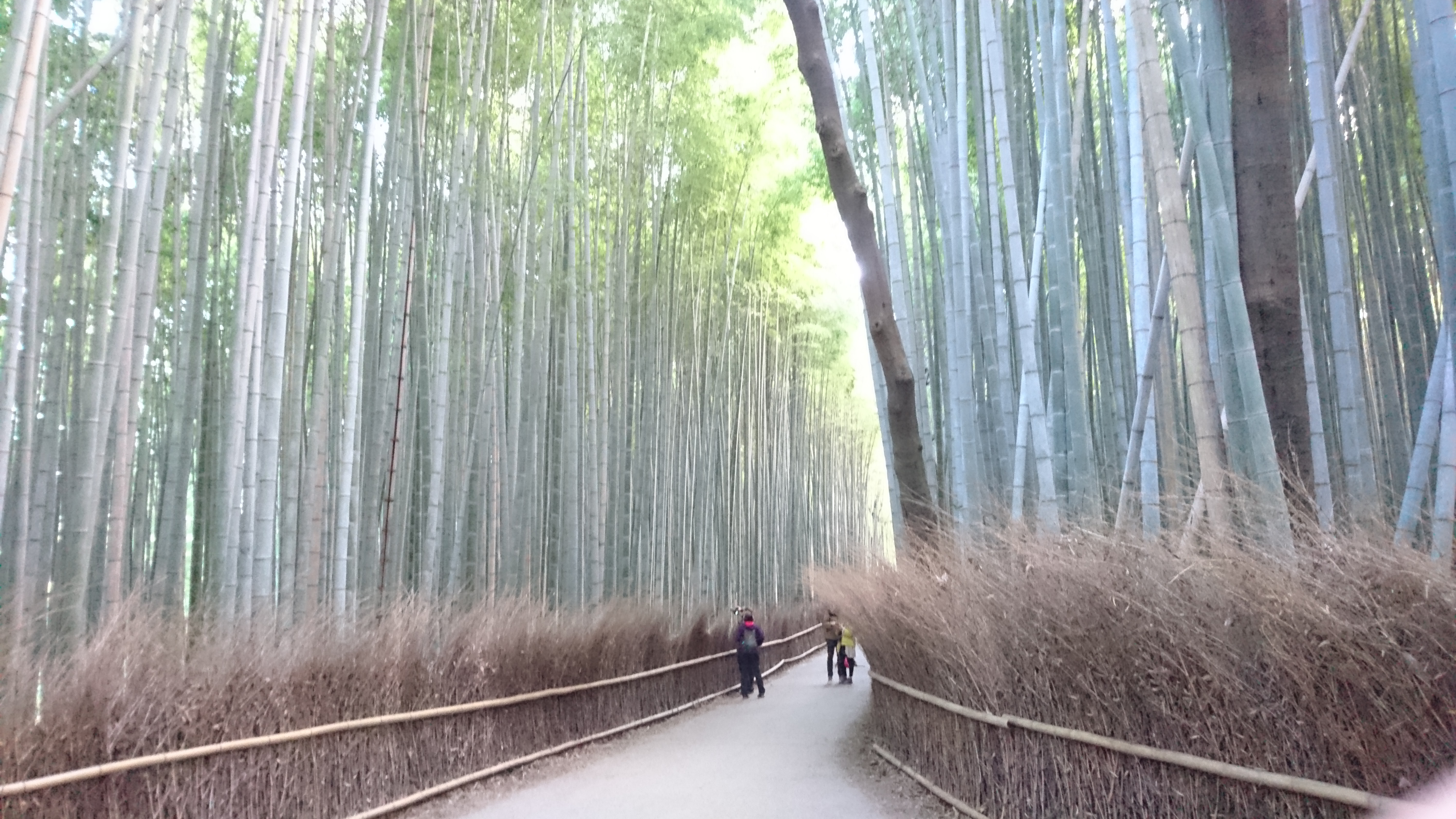 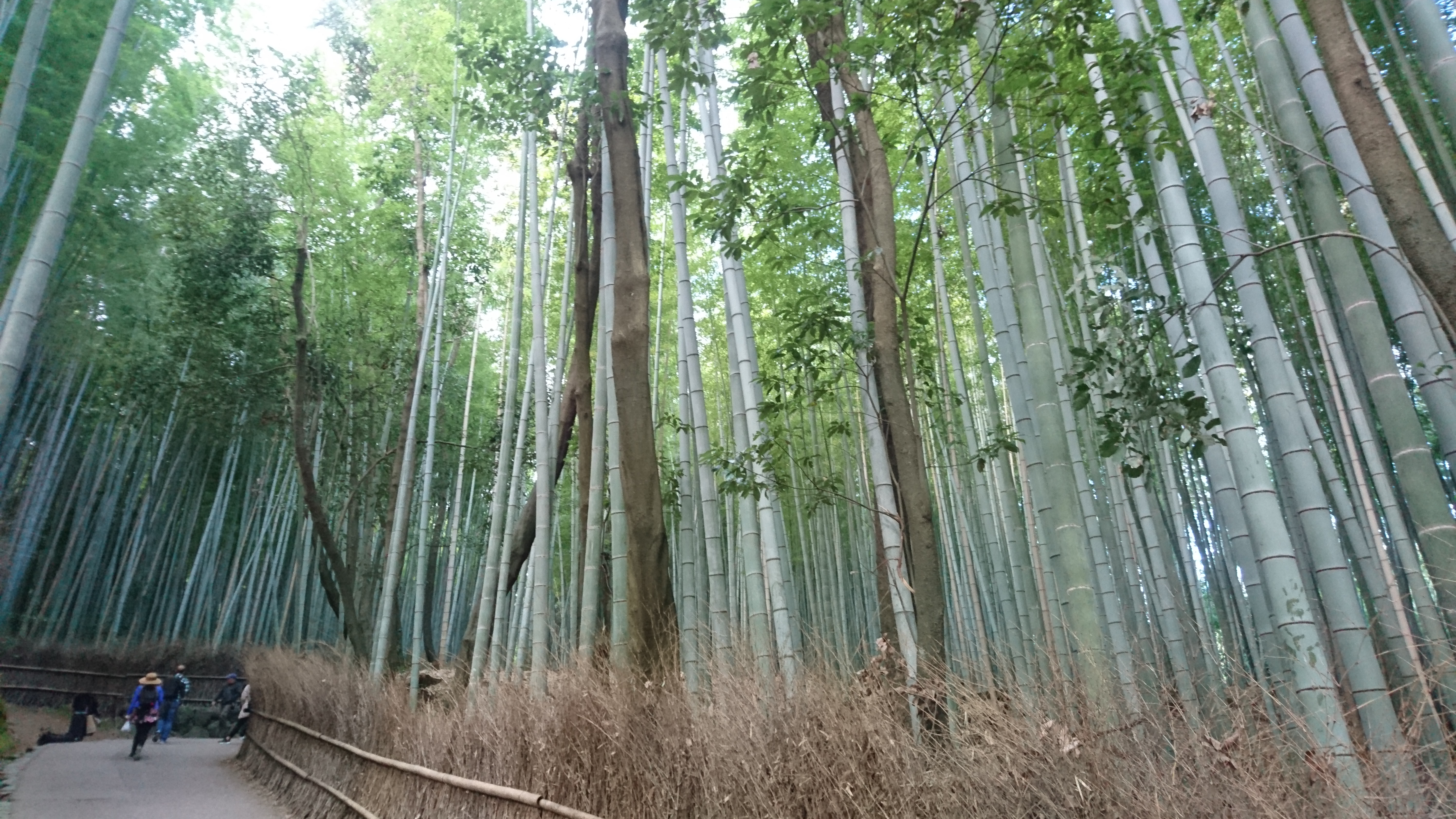 We made it on board our shirkansen, which was everything I had hoped it would be. Fast, efficient, and, thanks to an unusually clear afternoon and Alex’s remembering to request mountain-side window seats at the ticket office, we were treated to stunning views of Mount Fuji. Speeding past it on high-speed rail, eating from our station-bought bento boxes, sitting among the suited salarymen tapping away at laptops, we were living in a perfect - to the point of feeling staged - scene of modern Japan. 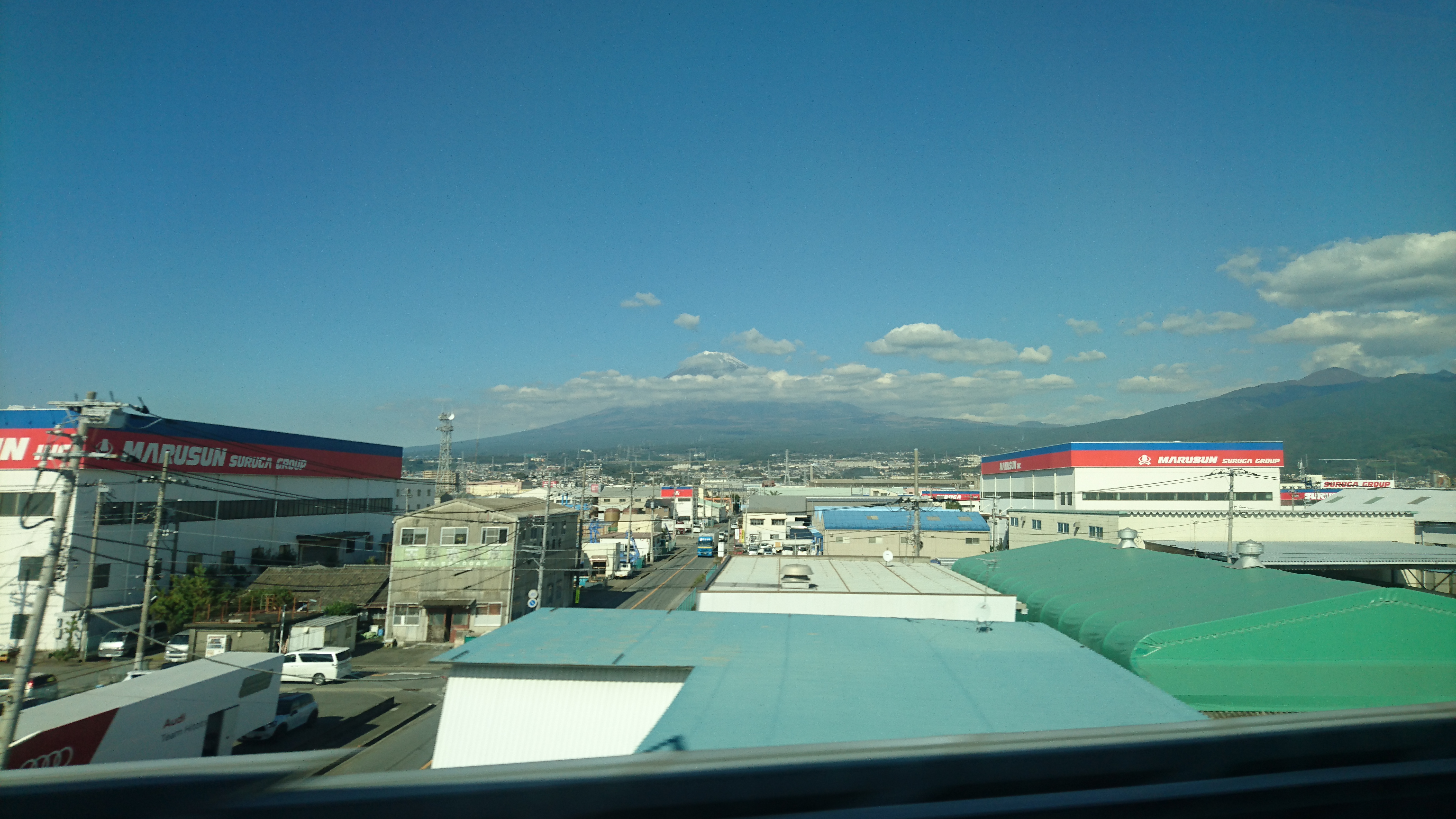 We arrived at Tokyo and managed a very brief coffee stop with Lotte at Tokyo Station, who by serendipity was on her way out that day from Tokyo to the northern coast as part of her travels all around East Asia. We dropped our bags off at our hotel before a long-planned (by Alex) and highly bizarre (in my opinion) appointment at the Pokemon Cafe, an only-in-Tokyo experience which had to be booked months in advance and completed within a 90 minute time-slot. But lest I felt out-of-place in a restuarant which from its portion-sizes to booze-free menu (extremely unusual in Japan) screamed that it was designed for childeren, a laughing group of middle-aged salarymen, some wearing paper crowns and all carring bags of Pokemon merchandise, emerged from the restuarant while we were queuing outside. It was such an unexpected and oddly heartening sight that I would have taken a photo were it not for fear of making them feel self-concious and breaking the spell.

After some ceremony we were admitted into the cafe. The climax of the “meal” (which lasted all of about three minutes) was marked by the sudden address by one of the uniformed waitresses through a headset microphone, entirely in Japanese, which turned out to be something of an extended introduction for a dancing Pikachu, who sent children (and some adults) into something of a frenzy, necessitating their coaxing by the well-trained waitresses to sit in a neat circle at the foot of our table while Pikachu did his stuff. The childeren, desperate to interact with the giant yellow lightning mouse, were given the opportunity to “shake-a-handsu” with Pikachu, an offer which was extended to any and all of the Pokemon Cafe diners young and old (we found it an unavoidable part of the experience). And then, just as the show was wrapping up, an elegant older woman, smartly dressed and wearing a pearl necklace (who had up until that point been looking after her grandchilderen and not showing much interest in what must surely be a totally alien culture to her) suddenly stuck her hand up and said “Pikachu! Shake-a-handsu?”. She then performed a comedy shuffle-run from her table, made a deep bow, and, with unbridled delight, shook Pikachu’s hand. 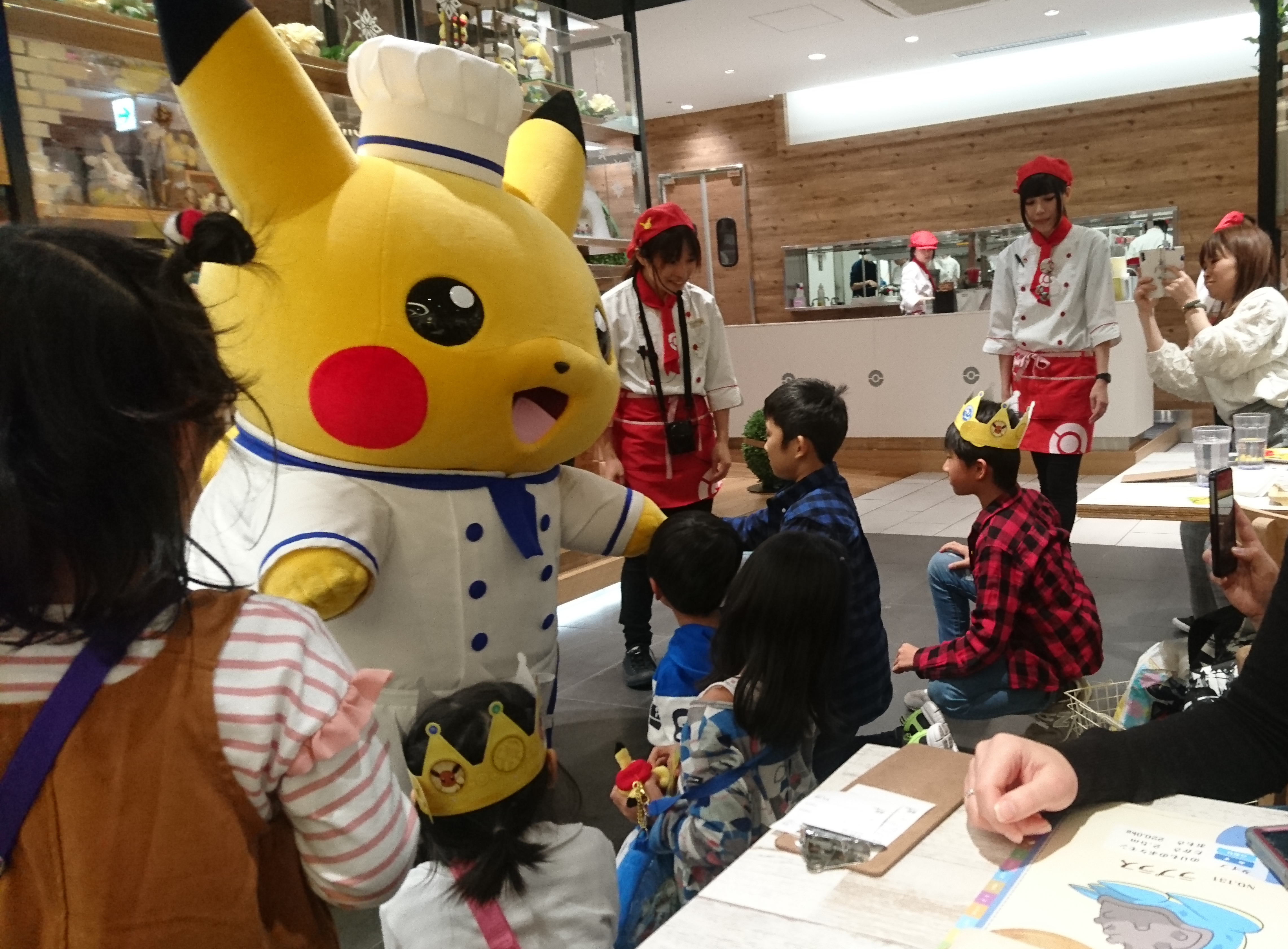 After this, by way of apology, I was given full control over our itinerary in Tokyo. Some highlights include: Shibuya crossing, rumoured to be the busiest intersection in the world; Harajuku, youth culture capital of Tokyo, essentially one long narrow street rammed with people with a very similar vibe to Camden Market; and Shinjuku, the neon light entertainment district full of bars, strip clubs and karaoke rooms. 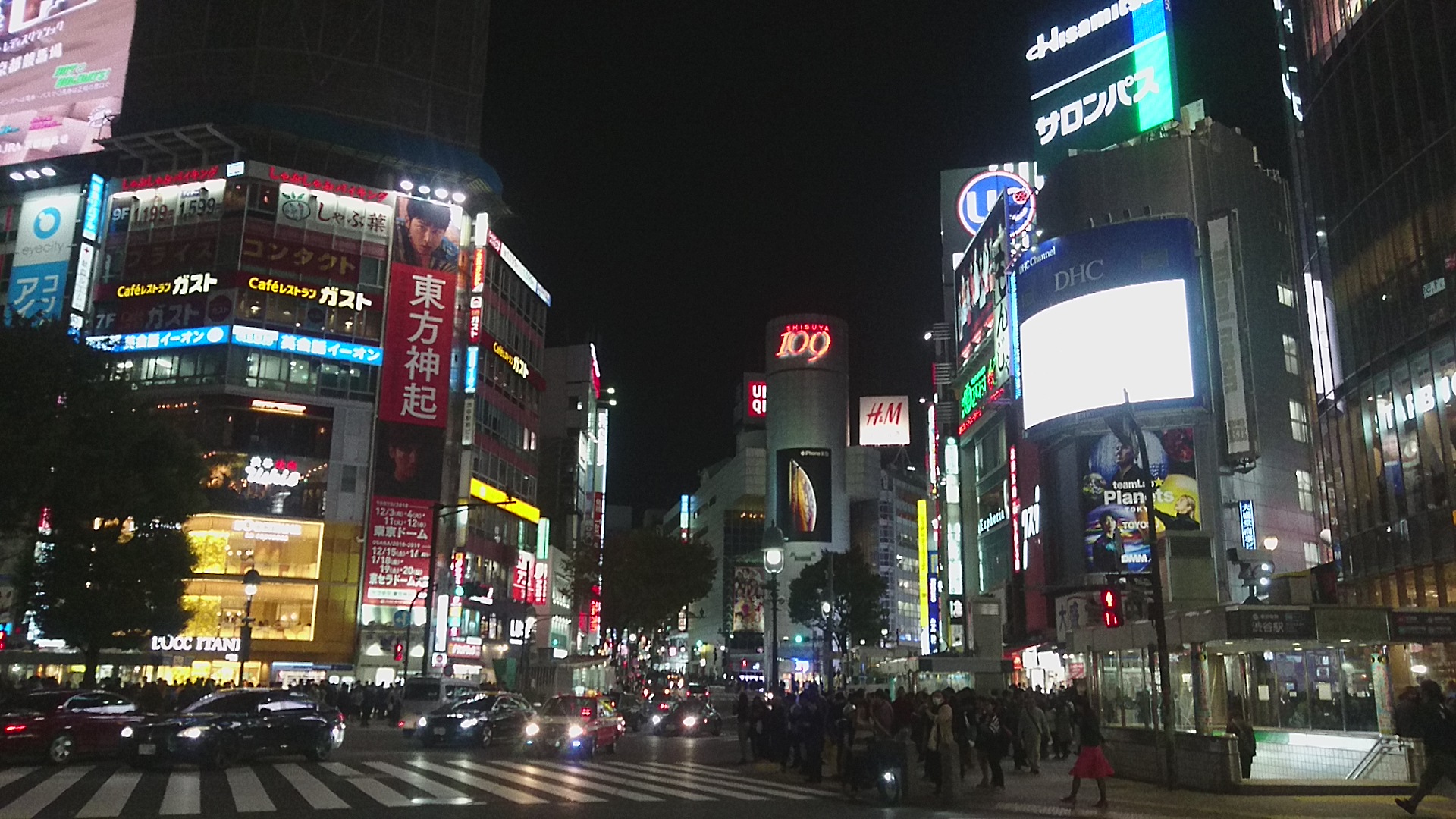 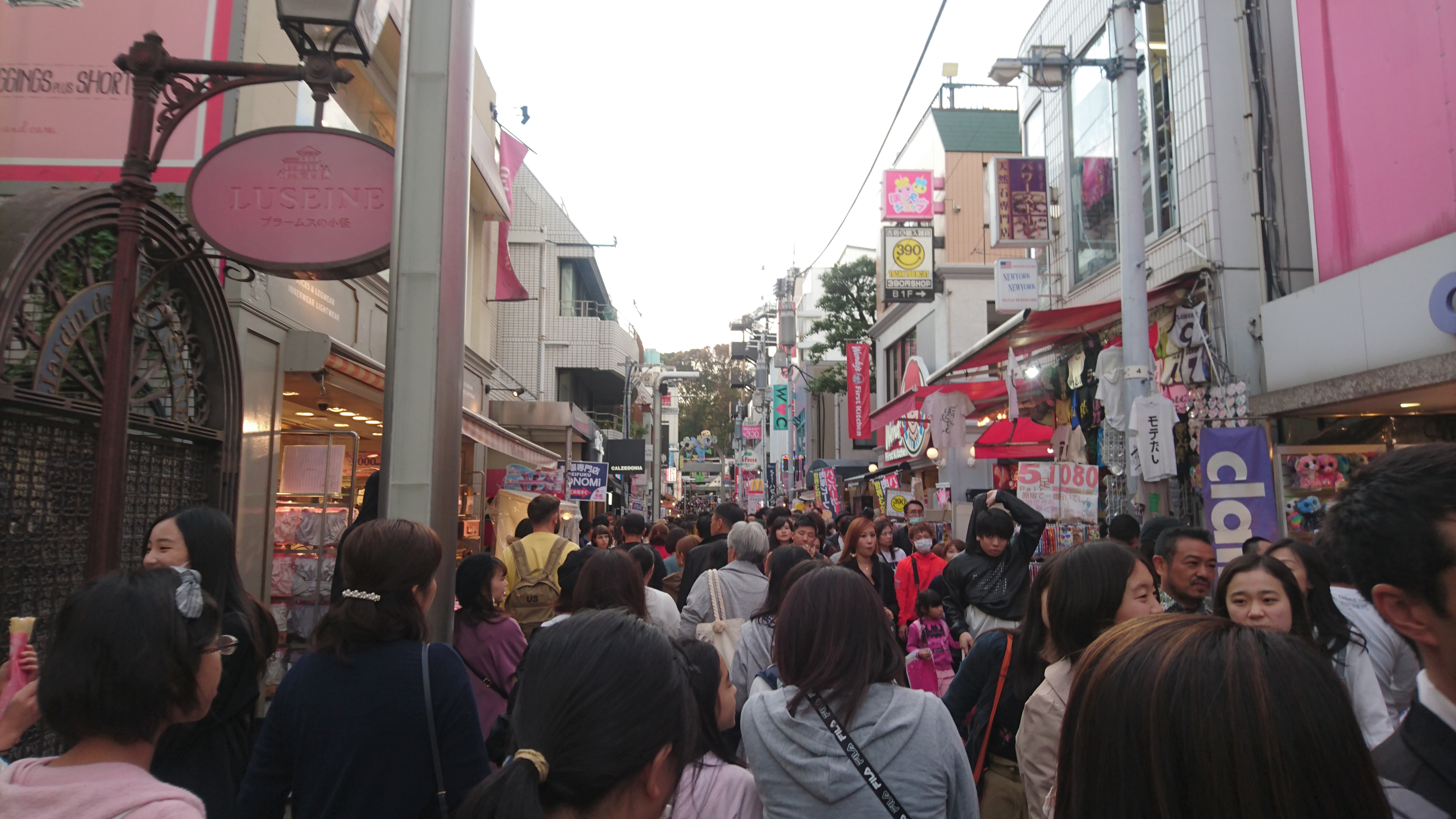 Harajuku on a Saturday afternoon, a.k.a hell on earth 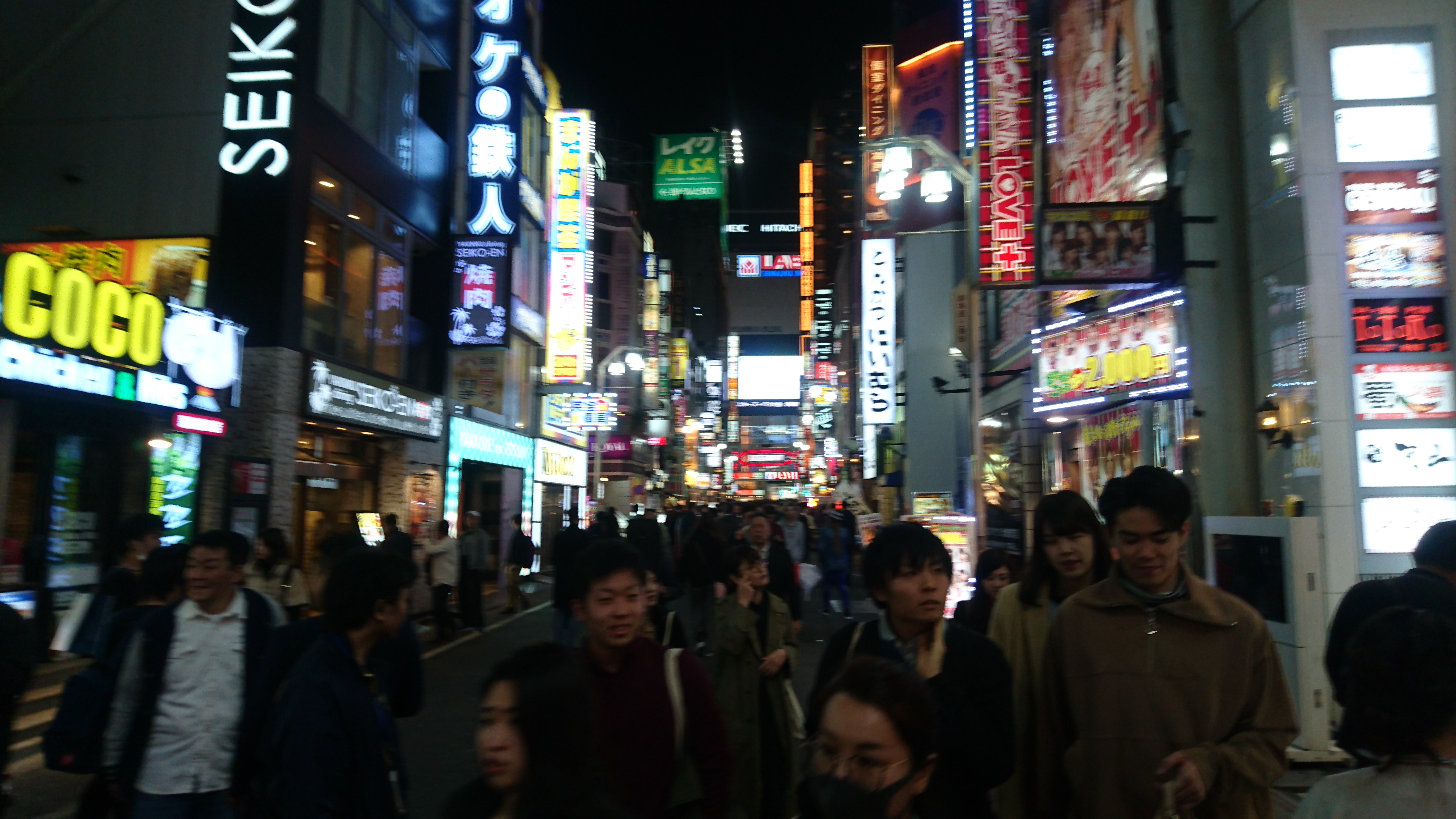 The bright lights of Shinjuku

In Shinjuku, our last night of the holiday, we splashed out on a beef barbecue resturarant (chosen partially for its seemingly tolerable vegetarian option) with an all-you-can-drink offer, before heading to a local izakaya (pub) where, after the baseball programme finished, the TVs began showing a Japanese documentary about Queen Elizabeth and Mary Queen of Scots, which induced me to try and explain to one of the locals the nature of sectarian violence in the UK using only gestures (Catholics = gesturing the shape of a Pope hat above my head, hard to know if he got the picture or not). 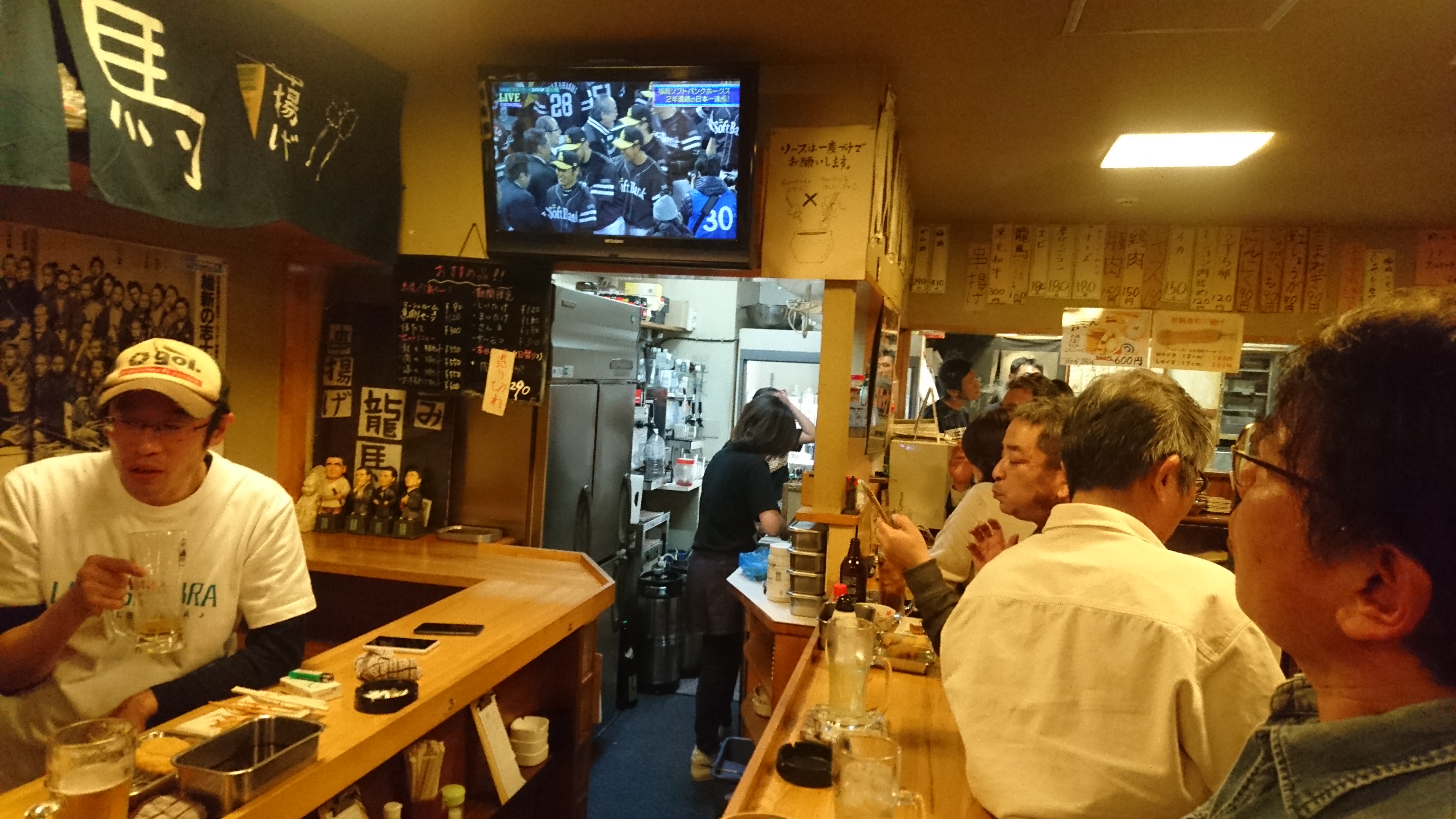 This is what people unburdened by the history of warring Christian sects look like. I was about to change that

We spent Friday night away from Tokyo, taking a bus out to Kawaguchiko and staying in a ryokan (traditional inn) with an onsen (hot-spring bath) and views over the lake. This is the serene image of unurbanised Japan that perhaps, had it not been for scheduling constraints, ought to have been our parting impression as opposed to a drunken night out in Tokyo (it would have made the journey home a bit more pleasant too). But maybe that’s for the best: after all, the reality of Japan for most Japanese is endless high-rise buildings and winding infrastructure, crowded bars and boozed-up salarymen staggering into a taxi supported by two much younger (and much much soberer) Tokyo-ites. 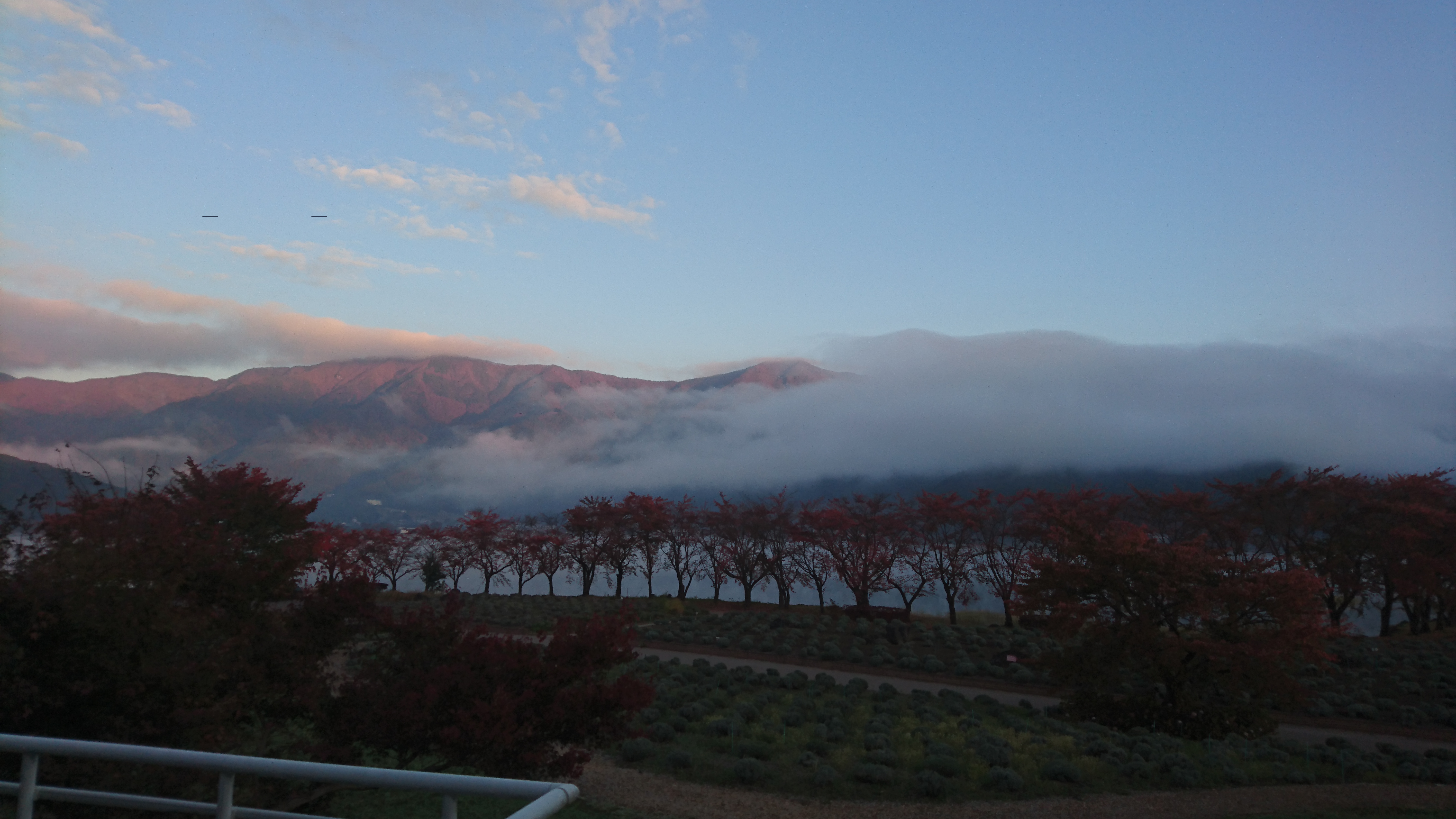 Daybreak from our room in the ryokan 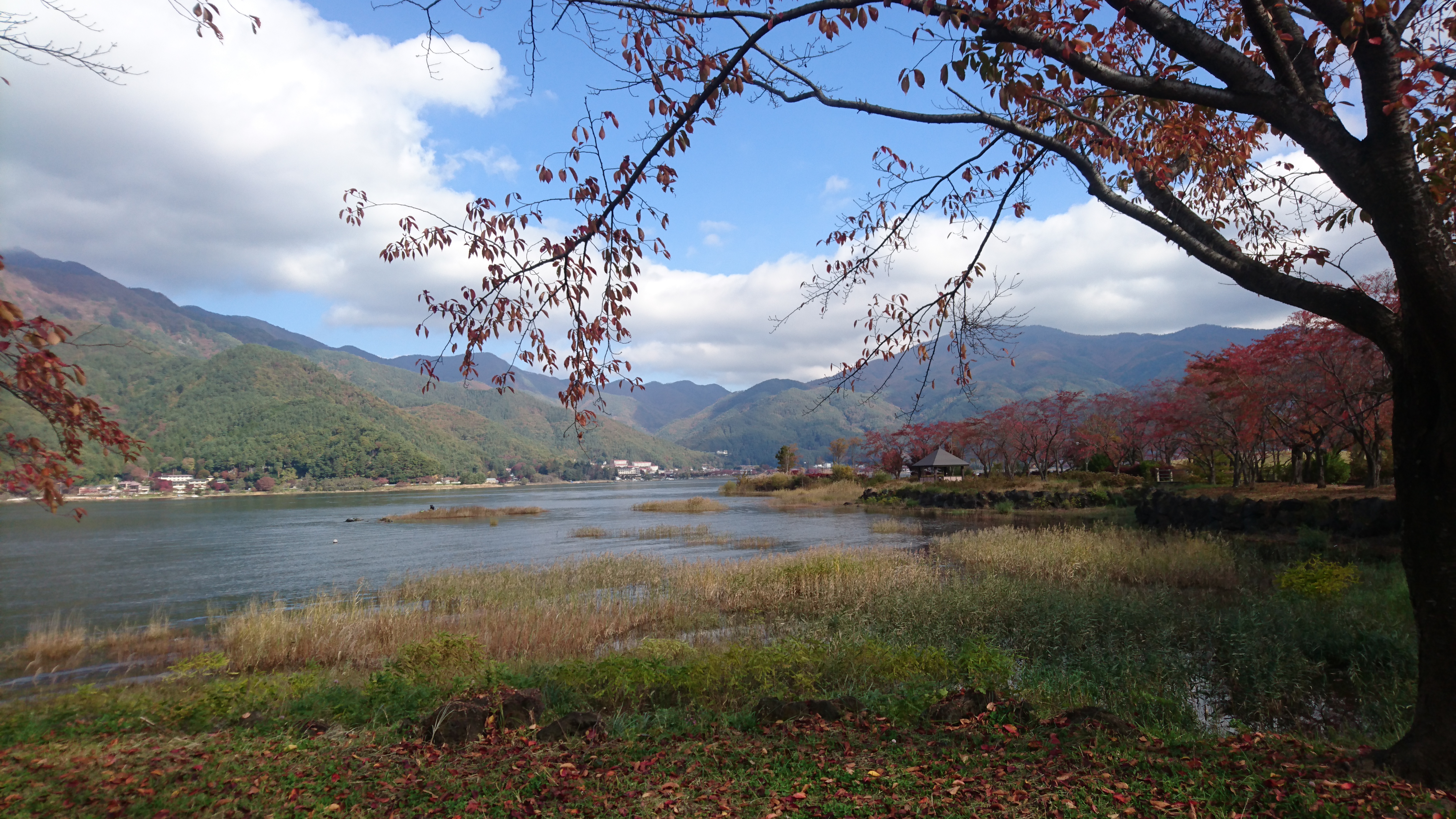 View over the lake 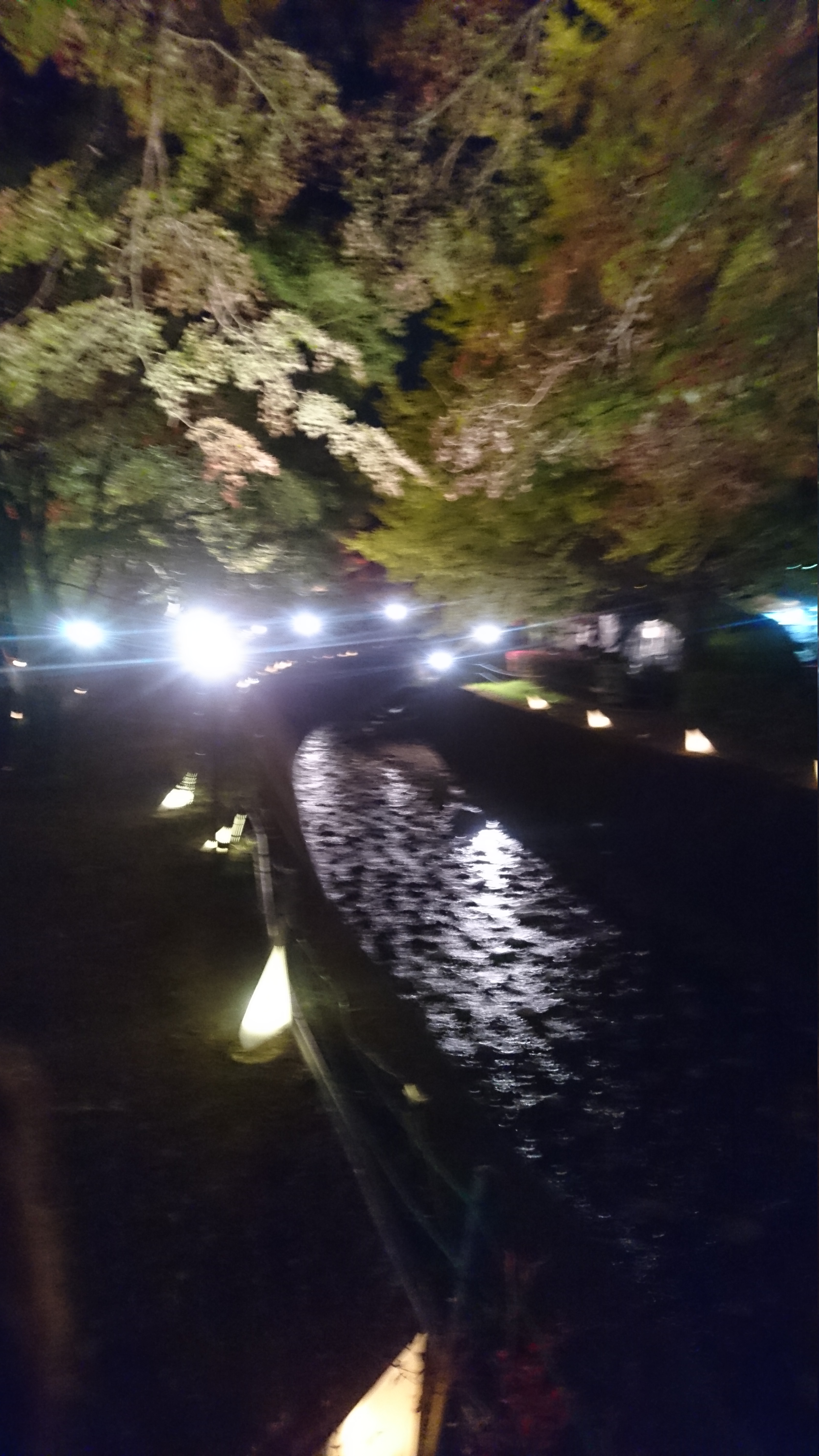 Autumn-reddened maple trees, illuminated by night as part of a festival