Alex flew in to Kansai Airport on Friday and we stayed that night in Osaka. (Although Osaka deserves a post of its own, I’m skipping it for now and will sum up our two non-consecuitive nights there later on.) On Saturday we went to Koyasan, an UNESCO World Heritage site 800 metres above sea level in the Kii mountains south-west of Osaka, reached by way of a suburbun railway which winds its way through tree-lined mountain tracks, before passengers disembark to board the connecting funicular. Any illusions of being fully off the beaten track were dampened by the acceptance of our ICOCA cards (region-wide Oyster cards) and announcements repeated in French, but still, it seems to be a destination missed by many tourists rushing between Kyoto and Tokyo. The attractions here are mainly spiritual, but don’t be fooled into thinking this reduces the number of gift-shops and vending machines. Still, most visitors were Japanese: tiny old ladies donning white robes and jingling sticks made up a significant demographic, the latest of over a thousand year’s worth of pilgrims whose money helped build magnificent temples and shrines.

The charming furnicular, reliably delighting passangers since 1960. Due to be scrapped and replaced by a new model so passengers can finally start their trip to a thousand year old mountain hideaway in a piece of generic modern infrastructure

Koyasan is one of the world centres of Esoteric Buddhism, and the “esoteric” monkier isn’t for nothing. Both Alex and I came away from the visit, which included a temple stay and participation in a 6:30am service, more than a little perplexed by the juxtaposition of such austere teachings with a thriving commercial touristic hub. Opportunities to exchange money for “wishes” to be ritually actualised by the monks in fire ceremonies were many. Some of the suggested wishes included “business prosperity”, “studying result fulfil”, “pray to receive baby” and (ironically) “avoid fire disaster”. But the monks are sincere, and so are the pilgrims. If anyone can be accused of not taking the teachings of Buddha seriously, it’s the Western visitors (who made up about a quarter of the visitors staying in our temple that night), who shared mixed-sex lodgings and covertly filmed the sacred ceremonies. It seems unlikely that such visitors will be put up with once their number pass a certain threshold, but for now they appear to offer a welcome income stream - less so a sincere desire to learn and understand Buddhism.

I know it’s stupid to expect all the monks to know karate, but we decided to avoid annoying them too much just to be on the safe side

The highlight of the stay, by far, were the two vegetarian (possibly vegan) meals prepared for us by the monks and presented on tiny trays with legs, and consumed kneeling on small pillows. Beer was available on request - we followed the lead of the Japanese pilgrims on this one. Following the meal Alex and I parted ways to engage in the widespread (and, though traditional, completely contemporary) practice of Japanese communal bathing. Entering our respective changing rooms, we stripped off, showered thoroughly with soap at a waist-height shower (a stool was provided - Alex used hers, I eschewed mine), before entering a hot bath for a nice soak. Though to the Japanese I must have looked like the missing link between great hairy apes and civilised man, nobody batted an eyelid, and the whole experience was pleasant and extremely relaxing. After that we dressed in our complimentary yukatas (traditional bath robes) and reconvened for bed at the religiously disciplined time of 8pm. 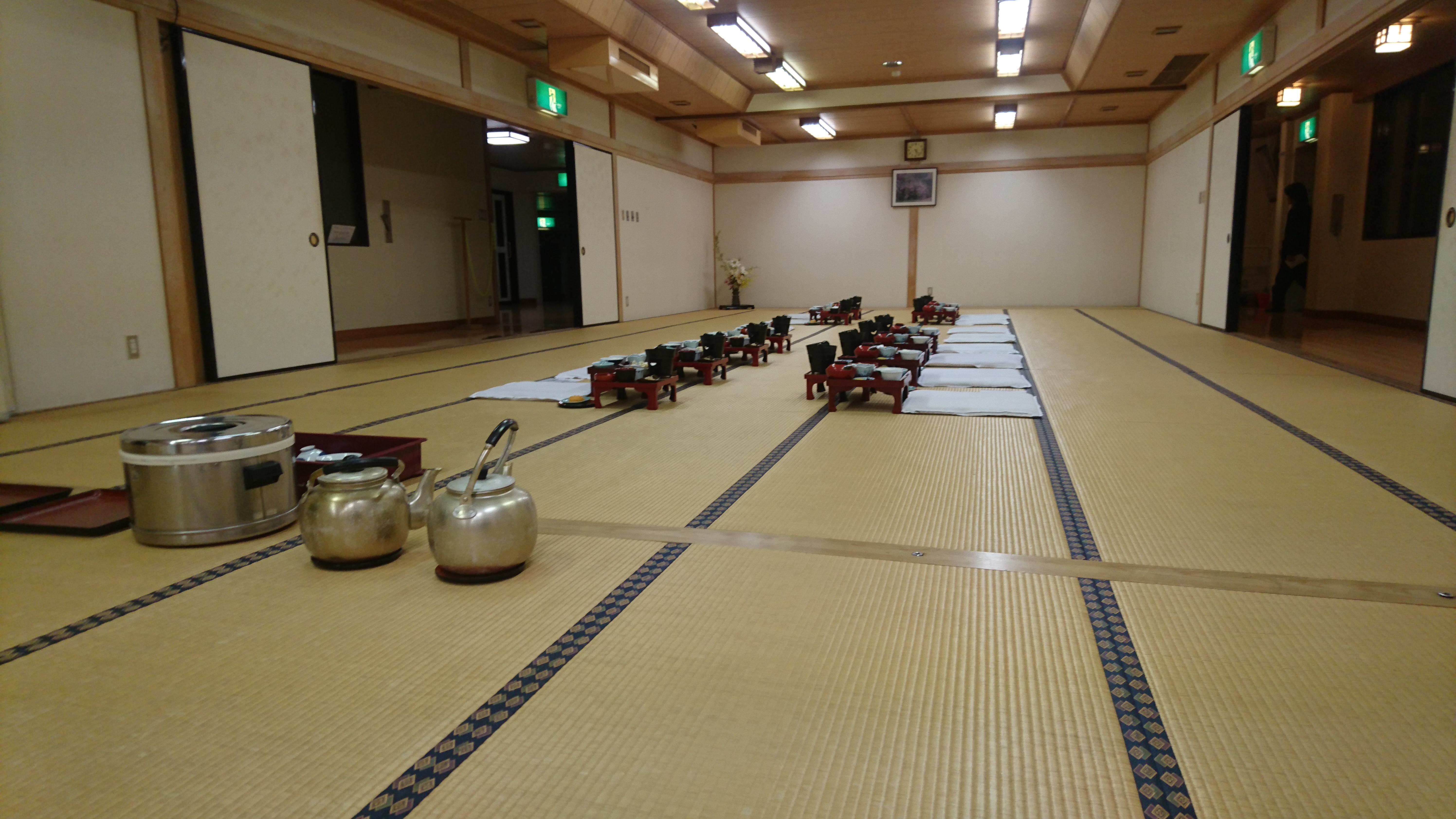 One TripAdvisor reviewer complained about a lack of ambiance, I guess the string quartet we had must have called in sick for their stay 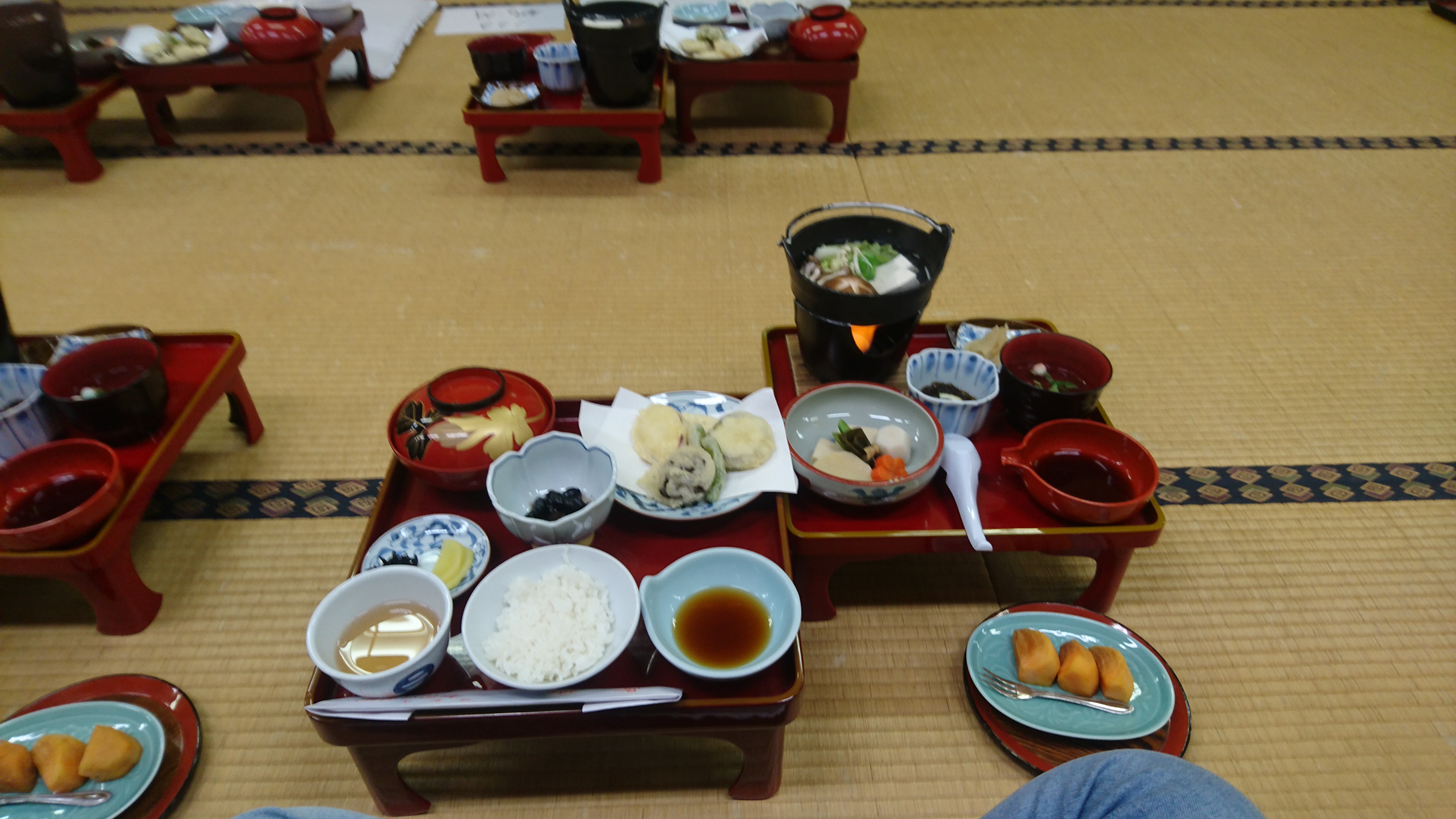 It’s not the size of the meal that counts; it’s how many different bowls, plates and tables you can arrange it on

Though the early hour of that evening’s dinner had not deterred us from turning up ten minutes early, making us the first diners to arrive, we were second-last to the morning service, scraping in just as the monks were taking their positions around the central shrine. We didn’t take any photographs so I’ll try my best to describe: we were sitting in three close-packed rows of chairs (our row at the front was crossed-legged on the floor) facing into a square room of about 10 by 10 metres. In the middle, a large lantern, adorned with gold and red decoration, facing that knelt three monks dressed in special robes, and between them and us, three tables supporting large bowls of burning incense blew wave after wave of fragrant smoke over the congregation. After a few minutes of tense silence, the chanting started, first one, then with all four joining in. The chanting was accompanied by loud, sudden bangs of off-tune cymbals, and sometimes accented by the sound of a large reverberating steel bowl which the rightmost monk would hit at predetermined intervals. The service lasted half an hour, during which time the sun fully rose. After some minor audience participation (the practising Buddhists among us, and among them one or two Westerners, were invited to light incense and make offerings), we were led through a circuit of the shrine, into a dark room to see an eerily illuminated Buddha statue, and then back into the room. Then the monks seemed to take new positions, one ran to the side of the room, picked up a folding white chair, and set it down in the middle of the shrine. Then, with much ceremony, an elderly monk with purple robes took this seat. What happened next I can only assume was some sort of sermon, injected with comedy and a proud gesture at one of the pictures hanging on the wall behind us - among the various religious paintings and calligraphy, a framed certificate from the United Nations, designating Koyasan as a World Heritage Site.

Afterwards, slightly bewildered and quite hungry, we sat down to breakfast, a similar but slightly less elaborate fare to last night, before checking out and going for a walk through the massive cemetery for which Koyasan is famed. Although cemeteries are one of those things whose functions vary little from culture to culture (just like castles, palaces or temples), even this was not spared a highly Japanese idiosyncrasy: on more than one occasion, we encountered graves or memorials with large corporate logos cast in stone - including household names such as Nissan and Panasonic - apparently honouring deceased workers. A fascinating insight into Japan’s unique corporate culture, it seems that in contrast to the Western worker, who keeps their CV up to date and the next opportunity always in sight, what is expected of the Japanese salaryman is absolute loyalty to their company, for life, and even beyond. 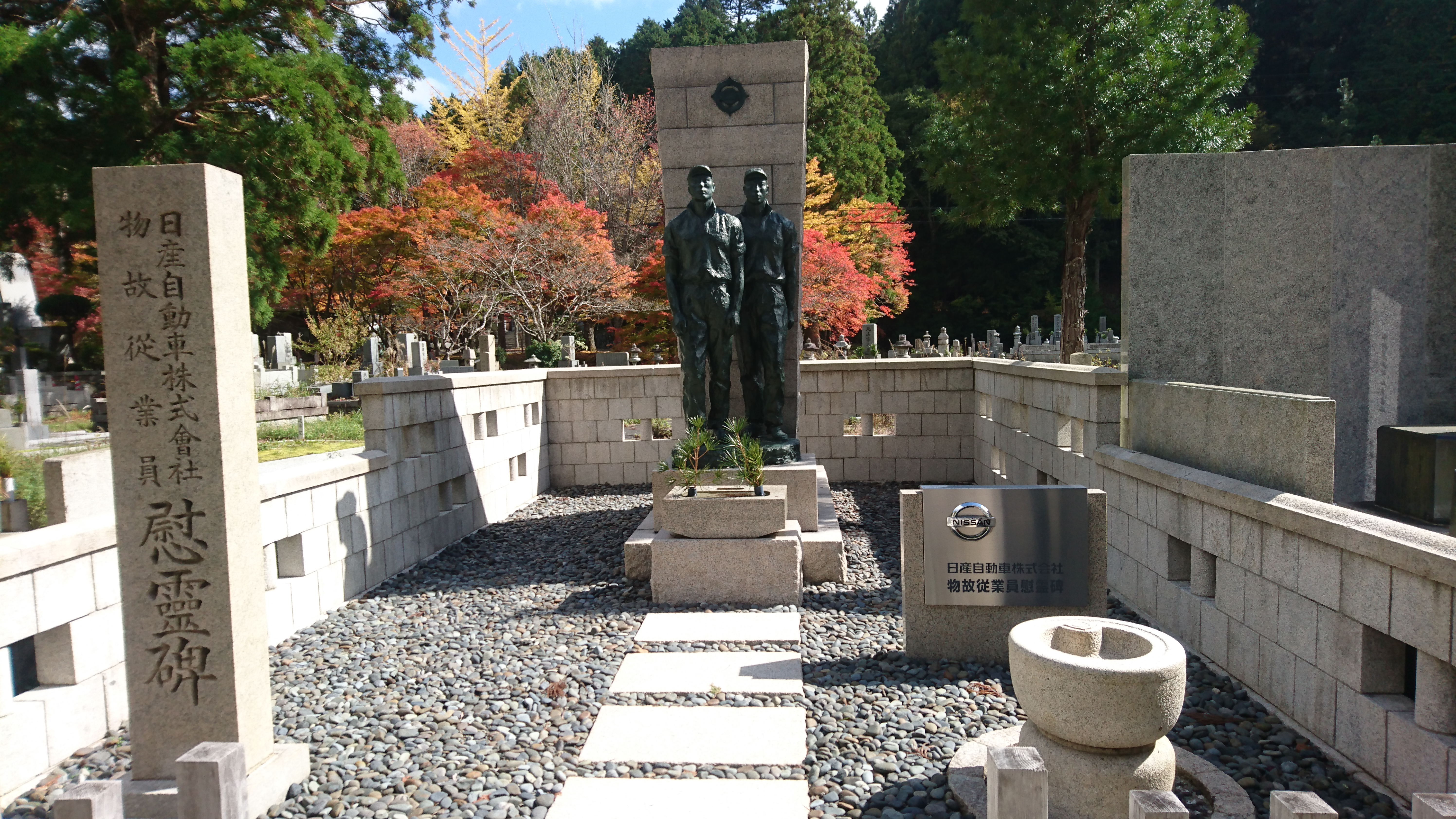 Dedicated to the workers of the Nissan Corporation, who, even in death, are lazy good-for-nothings who should have their asses FIRED

Koyasan tries hard, and nearly succeeds, in removing us entirely from our earthly occupations. But the practicalities of Japanese society never felt far away. When we returned to Osaka, we embraced the neon lights and flowing sake with relish.